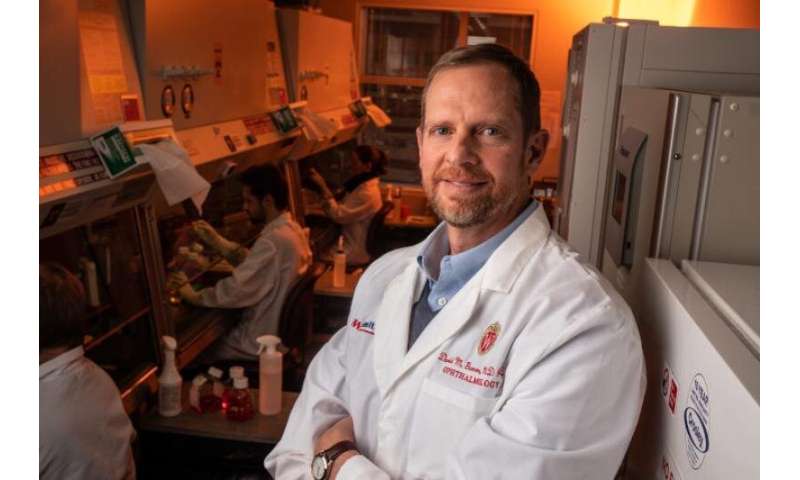 Best vitelliform macular degeneration, or Best disease, is an inherited eye condition that typically leads to blindness over the course of a few decades. The disease can be caused by more than two hundred mutations in the BEST1 gene.

A paper chronicling the research, co-led by David Gamm, MD, Ph.D., professor of ophthalmology and visual sciences in the School of Medicine and Public Health, was published online July 23 in the American Journal of Human Genetics. The study was also led by Kris Saha, Ph.D., associate professor of biomedical engineering and Wisconsin Institute for Discovery, and Bikash Pattnaik, Ph.D., assistant professor of pediatrics.

This BEST1 gene encodes a protein that regulates the movement of chloride across a layer of the retina called the retinal pigment epithelium (RPE). Best disease is dominant, meaning that people who inherit only one faulty copy of the BEST1 gene—from either their mother or their father—will develop the disorder. Mutations in BEST1 cause the retinal layer to break down, resulting in blurred central vision that progresses to irreversible vision loss.

“People with Best disease have a wide range of mutations that can affect different parts of the protein, all of which were thought to require complex, individualized gene therapies to fix them,” Gamm said. “We found that many of these mutations were actually very sensitive to a broader gene therapy method that is already established for other retinal diseases.”

Fixing a dominant genetic disease via gene therapy typically requires precise removal or repair of the nonfunctional gene without causing harm to the functional gene—a difficult task that is frequently unsuccessful. In contrast, recessive genetic diseases that arise when a person inherits two nonfunctional genes—one from each parent—can be corrected by a technique called gene augmentation. This well-established process introduces a functional copy of the gene to fill the void.

“To use another analogy, dominant mutations produce workers that actively look to sabotage the efforts of their capable coworkers, whereas recessive mutations produce proteins that never show up for work at all,” Gamm said. “As it turns out, the latter situation is usually simpler to treat than the former.”

A team of researchers at the McPherson Eye Research Institute, which Gamm directs, hypothesized that it may be possible to adequately dilute the influence of the nonfunctional BEST1 protein by counter-balancing it with many functional copies of BEST1 protein through gene augmentation.

In the lab, the approach worked in RPE cells derived from induced pluripotent stem cells of patients with most, but not all, of the BEST1 gene mutations they tested. Where gene augmentation did not succeed, the team was able to correct the dysfunction using CRISPR-Cas9 gene editing.

The research was carried out in large part by Divya Sinha, Ph.D., an assistant scientist in Gamm’s lab, Ben Steyer, a former MD-Ph.D. student in Saha’s lab, and Pawan Shahi, Ph.D., postdoctoral research associate in Pattnaik’s lab. The research team also included Sushmita Roy, Ph.D., associate professor of biostatics and medical informatics at the UW School of Medicine and Public Health and Wisconsin Institute for Discovery.

The scientists demonstrated that their two-pronged gene therapy strategy may hold potential to treat all Best disease mutations in a highly effective manner.

“We were able to reverse the disease in all the cell lines using one method or the other,” Gamm said. “We were also able to determine which mutations were likely to respond to the first-line gene augmentation strategy, and which would be better served with the second-line gene editing approach.”

An additional benefit came into focus as this research progressed, according to Gamm.