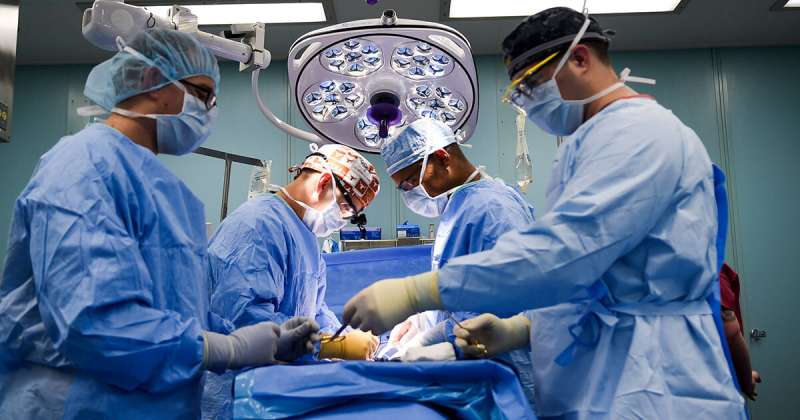 If you’re mowing the lawn and your spouse asks you to “cut it a little shorter,” any discrepancy resulting from your different interpretations of “little” is harmless. In an operating room, however, it can mean the difference, if not between life and death, then between successful healing and injurious failure.

That’s why a multidisciplinary team of researchers, including a linguist from the University of Kansas, set out to test whether such inexact language in the OR can lead to medical errors.

A new paper co-written by Andrew McKenzie, KU associate professor of linguistics, and Drs. Gary Sutkin and Cynthia Liu, professors at the University of Missouri-Kansas City School of Medicine, demonstrates that such fuzzy phrasing can indeed lead surgeons down a path that could end in a serious medical error. The authors conclude “Semantically Ambiguous Language in the Teaching Operating Room,” published in the Journal of Surgical Education, by offering suggestions for combating inexactitude in the OR that include dispensing with politesse and emphasizing explicitness.

“We make the point in the paper that surgery is too precise to not use precise language,” Sutkin said.

For his part, McKenzie said he was pleased to be involved in a research project that had such immediate, real-world application.

The authors reviewed video recordings made during six separate surgical procedures performed by residents under the supervision of specialist physicians like Sutkin and Liu. They found 131 instances of inexact language that could have led to a medical error.

“Sometimes it’s cutting 4 centimeters when you should have cut 3 1/2,” Sutkin said. “But these are listed as potential near misses, as well—something that’s headed towards an error. The idea is to see if we can reduce even getting close to a near miss just by tweaking or being more attentive to the things we’re saying.”

As a semanticist, McKenzie introduced such terminology as deixis and anaphora to the conception of the paper. The paper lists 14 such categories of inexact language that can start down the road to a medical error. “Deixis” is defined as “linguistic expression that explicitly refers to the utterance it was made in, the locations of the people participating in it, or the immediate context surrounding it,” giving the example of the sentence “Take this over there.” The words “this” and “there” are potentially unclear.

Likewise, an unclear anaphor is a phrase “for which antecedent is not clearly stated or multiple possible antecedents exist.” In the following sentence, for example, whom does the word “he” refer to? “Bill went home. Ted came home later. He went right to sleep.”

Then there are questions or suggestions that should really be phrased as explicit instructions from the teaching physician to the resident, Sutkin said.

The paper even suggests decking out operating rooms with semaphores, or signs, indicating right and left, top and bottom.