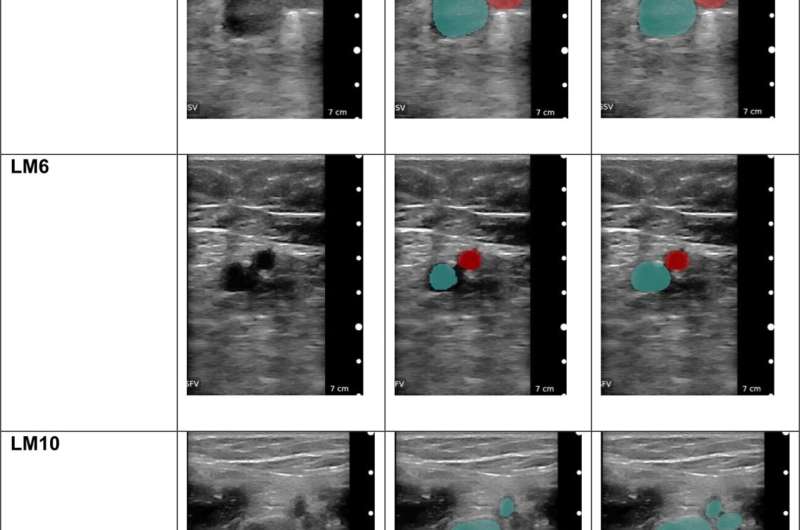 A team of researchers are developing the use of an artificial intelligence (AI) algorithm with the aim of diagnosing deep vein thrombosis (DVT) more quickly and as effectively as traditional radiologist-interpreted diagnostic scans, potentially cutting down long patient waiting lists and avoiding patients unnecessarily receiving drugs to treat DVT when they don’t have it.

DVT is a type of blood clot most commonly formed in the leg, causing swelling, pain and discomfort—if left untreated, it can lead to fatal blood clots in the lungs. 30–50% of people who develop a DVT can go on to have long-term symptoms and disability.

Researchers at Oxford University, Imperial College and the University of Sheffield collaborated with the tech company ThinkSono (which is led by Fouad Al-Noor and Sven Mischkewitz), to train a machine learning AI algorithm (AutoDVT) to distinguish patients who had DVT from those without DVT. The AI algorithm accurately diagnosed DVT when compared to the gold standard ultrasound scan, and the team worked out that using the algorithm could potentially save health services $150 per examination.

This is the first study to show that machine learning AI algorithms can potentially diagnose DVT, and the researchers are due to start a test-accuracy blinded clinical study, comparing the accuracy of AutoDVT with standard care to determine the sensitivity of the for picking up DVT cases. The hope will be that AutoDVT will get the right diagnosis faster to the nearly 8 million people worldwide who potentially have a venous blood clot each year.

“The AI algorithm can not only be trained to analyze ultrasound images to discriminate the presence versus the absence of a blood clot—it can also direct the user using the ultrasound wand to the right locations along the femoral vein, so that even a non-specialist user can acquire the right images,” said study team member Christopher Deane from the Oxford Haemophilia and Thrombosis Centre.

The research team hope that the combination of the AutoDVT tool, with the inclusion of the AI algorithm, will allow non-specialist healthcare professionals, like GPs and nurses, to quickly diagnose and treat DVT. It may additionally allow the collection of images by non-specialists which could be sent to an expert facilitating diagnosis of those unable to get to a specialist.

“Currently, many patients do not have a definitive diagnosis within 24 hours of a suspected DVT, and so many patients end up receiving painful injections of what can often be an unnecessary anticoagulant, with potential side-effects,” said Dr. Curry, who is also part of the Oxford Centre for Haematology.