The coronavirus disease 2019 (COVID-19) pandemic continues to take a heavy toll on human life and economic well-being. Caused by the severe acute respiratory syndrome coronavirus 2 (SARS-CoV-2), it has not been effectively countered so far, by most currently available therapeutic or preventive antivirals. Vaccine roll-out has begun but is unlikely to achieve adequate coverage in time to prevent many more deaths. 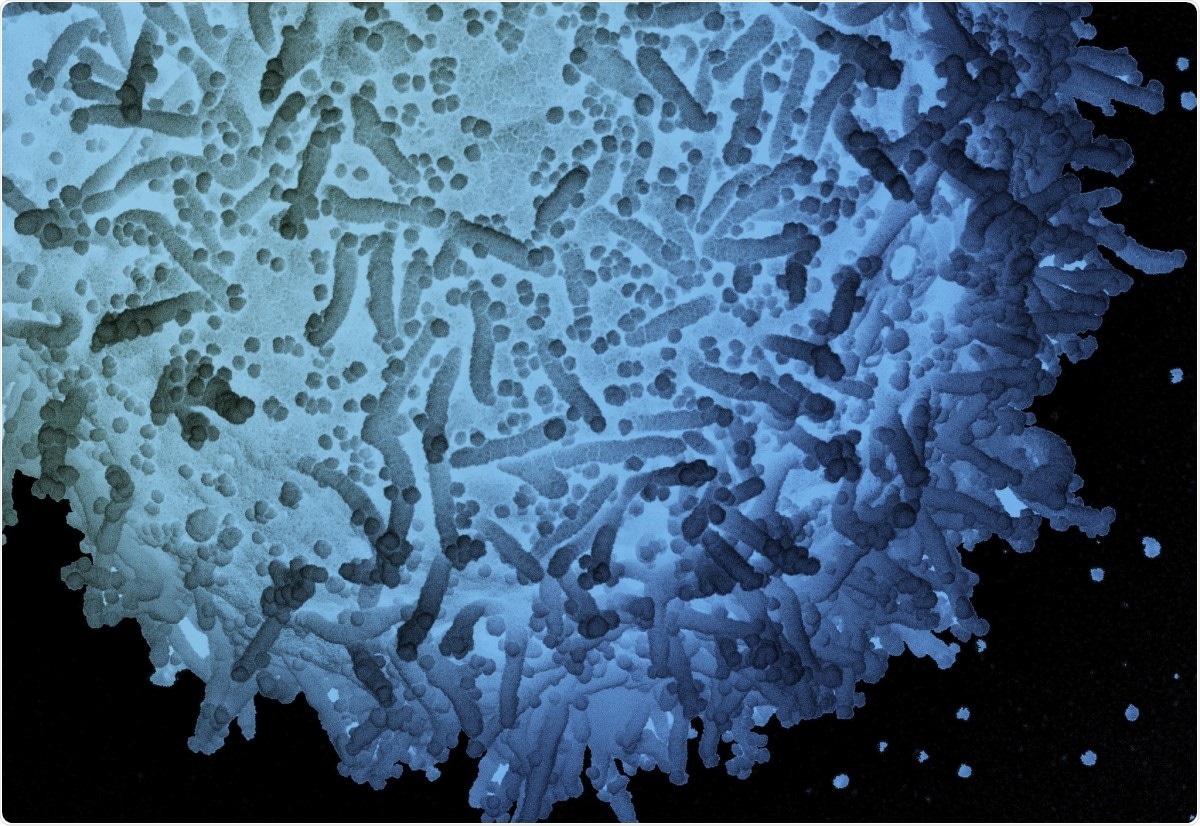 The urgent need for novel therapeutics has spurred investigation into broad-spectrum inhibitors of viral infection and replication. A new paper published in the journal Small describes the antiviral activity of synthesized graphene platforms, pointing to new therapeutic approaches against this virus.

SARS-CoV-2 is an enveloped virus from the beta‐coronavirus genus. It infects the target host cell via its spike glycoprotein, which binds to the angiotensin‐converting enzyme 2 (ACE2) on the surface of host cells and initiates virus entry. Most vaccines and therapeutic antibodies therefore target this protein.

However, researchers have already noted that just a few mutations in the spike protein at the receptor-binding domain (RBD) may allow the virus to escape neutralization by antibodies that recognize epitopes, including the mutated residues. The new study therefore focuses on finding new viral targets for inhibition of viral entry.

The researchers explored the use compounds that cause irreversible tearing of the viral membrane, but leave human cell membranes intact, or cause only easily repairable damage. This prerequisite ruled out detergents like sodium dodecyl sulfonate, since these are strongly toxic to human cells.

The researchers in the current study turned to graphene, a 2D nanomaterial composed of carbon. Modified graphene presents a platform capable of inhibiting a variety of pathogens, both bacterial and viral, because of its high binding affinity.

This is mediated by the multivalent interactions occurring at the functionalized interface. These include antibody- or ligand-mediated interactions, electrostatic bonds, and pathogen traps. Such trapping and wrapping mechanisms have been demonstrated in earlier studies, which showed graphene to have virustatic properties rather than virucidal.

Virucidal effects of graphene may be mediated by hydrophobic interactions or mechanical effects. To ensure this, the researchers added functional groups like polyglycerol sulfate (PGS) and aliphatic chains to the graphene sheet surface. This helped them create an array of graphene platforms, which were then compared for their inhibitory effect on coronaviruses. 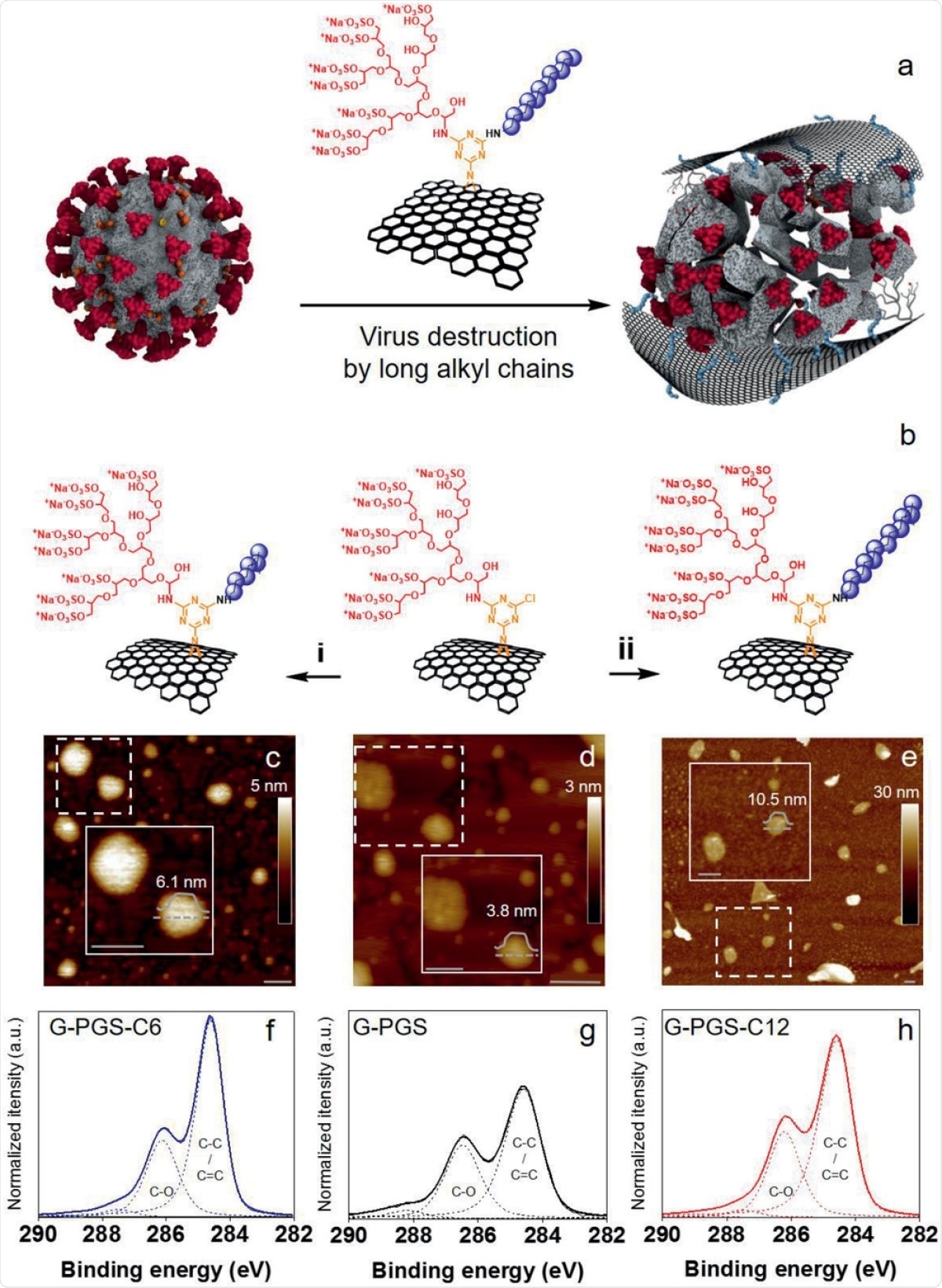 a) Schematic representation of intended interactions between G-PGS-C11 and SARS-CoV-2. While negatively charged polyglycerol sulfate interact with the positively charged domains of S on the surface of SARS-CoV-2, aliphatic chains penetrate into its membrane and disintegrate the virus. b) Schematic representation of the synthesis of G-PGS-Cx. Synthesis of G-PGS derivatives with i) short (C6, C9) and ii) long aliphatic chains (C10, C11, and C12). G-PGS, DMF, C6H13NH2/C9H19NH2/C10H21NH2/C11H23NH2/C12H25NH2, triethylamine, 25–60 °C, 24 h. c–e) AFM images with enlarged parts showing typical size and height of graphene sheets, and highly resolved f–h) XPS spectra for G-PGS-C6, G-PGS, and G-PGS-C12, respectively. Scale bars correspond to 100 nm.

Graphene with aliphatic chains containing less than 10 carbon atoms failed to show strong inhibition, but when longer chains were used, inhibition and virion destruction was enhanced. However, this was accompanied by cytotoxicity.

Both PGS and alkyl chains were important in such electrostatic and hydrophobic interactions, which showed synergistic virus capture and rupture activity against SARS‐CoV‐2, respectively.

They found that the presence of the long aliphatic chains on the graphene sheets led to penetration of the cell membranes, which was responsible for cell death. This would therefore lead to the conclusion that viral particles would be inactivated only in the presence of such alkyl chains, with an optimum number of 11 carbon atoms.

In a feline coronavirus experiment, they observed effective abolition of infection when treated with the functionalized graphene compound G‐PGS‐C11, indicating their potential as preventive agents.

Secondly, they observed the same almost complete inhibition of virus replication within already infected cells. The potential efficacy of G‐PGS‐C11 as a therapeutic agent following infection is therefore obvious.

Most viral inhibitors competitively block virus-receptor binding, but leave the virion capable of infection if released from inhibition. However, G‐PGS‐C11 showed clear virucidal activity, reducing viral titers by two orders of magnitude, and outperforming the similar compounds G‐PGS‐C10 and G‐PGS‐C12.

Cryogenic transmission electron microscopy (cryo‐EM) of feline coronaviruses incubated with the virustatic G‐PGS‐C6 and G‐PGS‐C11 showed that while the former failed to produce any morphological changes, the latter produced disintegration of the virions. This was due to envelope rupture and loss of the spikes.

The flexible sheet structure of the graphene allowed multiple interactions to occur with the same virus particle, increasing viral capture and rupture.

The researchers also identified the half-maximal cytotoxic and inhibitory concentrations (CC50 and IC50, respectively) of G‐PGS‐C11 as ~43 and ~5 µg/mL, respectively. This shows the window of therapeutic safety. The tenfold diameter of the typical cell relative to the virus confers on the former a more curved membrane, capable of greater strain. Moreover, the cell is able to repair its membrane easily, unlike the virus, which lacks the machinery to do so.

G‐PGS‐C11 was also demonstrated to inhibit SARS-CoV-2 at concentrations well below its CC50, namely, an IC50 of 0.8 µg/mL. Thus, its selectivity index, indicating its safety to cells, is 86. Indeed, at a dose of 50 µg/mL, irreversible inhibition of the virus occurred, but the basal cell layer remained intact.

What are the implications?

The study demonstrates the utility of graphene as a 2D functionalized platform to capture viral particles and inactivate them. The functional groups were dual in nature, comprising polyglycerol sulfate and aliphatic chains 11 carbon atoms in length.

The strongest virucidal activity was seen with G‐PGS‐C11, which was not associated with significant toxicity to the host cell. “The observed post‐treated effect and selectivity index of 86 opens the door for potential therapeutic applications.”